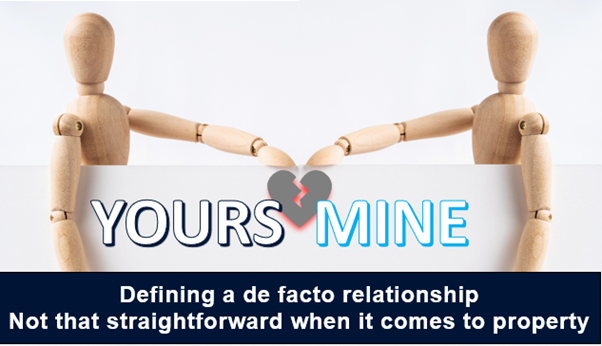 Are you in or contemplating a de facto relationship?

We are often asked questions around this topic and how it can impact your finances.

Simpson Western recently produced this article which will help answer many of your questions.

You may have heard that ‘Marriage is betting someone half your stuff that you’ll love them forever’. But what happens about the ‘stuff’ you own before you formally say “I do”?

We take a closer look at de facto relationships as defined in the Property (Relationships) Act 1976 (PRA for short). This is key if you and your partner separate and have a dispute over property.

The landscape changes again if Harry and Kahu each own their own home and want to keep their independence, or if Harry lives in Auckland away from Kahu in Tauranga? Does it matter that Harry hasn’t told Kahu about his significant credit card debt? Or that Kahu’s children think Harry is a ‘friend’?

Partners in relationships come with their unique experiences and backgrounds, forming bonds in any number of ways. Determining when a relationship becomes de facto requires an analysis of many factors.

A de facto relationship is a romantic relationship between two adults, who are not married or in a civil union, who live together as a couple. Many de facto relationships start when couples begin living together, as the legal term suggests. However, when couples have other commitments such as children or jobs in different cities requiring them to live apart, the science of determining when two people start living together as a couple becomes harder.

Living together as a couple

The nature and extent of the relationship must be taken into account. You should think about whether you would rely on your partner in an emergency and the level of dependency you have on your partner. A couple may date for many months or years before considering themselves to be serious or update their social media relationship status. It is also relevant whether the relationship is public or known to family and social circles of the couple when looking at whether a de facto relationship exists.

There are practical considerations: do the partners care for and support their partner’s family or children? Do they look after their partner’s home, including performing household chores and cooking? Entering a relationship with children from a previous relationship provides layers of complexity — deciding when to introduce partners to children, and navigating living arrangements, further complicates things.

The analysis of whether a de facto relationship exists also looks at whether there are financial commitments together such as owning joint property or bank accounts, and any support provided from one partner to the other. Some de facto partners retain separate accounts for their independence or security, but this alone will not stop a relationship from becoming de facto.

Many couples do not consider it relevant to define their relationship; and for many this is perfectly fine.

If, however, a couple is living in a property that was owned by one partner before the relationship began it will be classified as relationship property after the couple reaches its three-year anniversary, or earlier in some situations. If they separate, the property will be divided equally, rather than remaining the property of the original owner.

Protecting personal assets from a relationship property division is best done before reaching the three-year threshold but can be done at any time. This is called ‘contracting out’. Independent legal advice for both parties is essential and should be obtained before entering into any formal agreement.

It is never too late to define your relationship with your partner. Whether you are introducing your partner to your family or buying some furniture together (or a house!), take a moment to consider whether you think you may have crossed into de facto, and potentially equal sharing, territory.

Whatever the stage of your relationship, it is wise to think about the longer-term impact this could have for both your futures.

If you need advice on a contracting out agreement or you are unsure whether your relationship is de facto, get in touch to see how we can help you today.

NB: The Property (Relationships) Act 1976 has been reviewed by the Law Commission which recommended significant changes to this piece of legislation. However, in late November 2019, the government responded by stating it would not implement nearly all of those recommendations until the Commission has carried out a review of succession law.

This article was first published in the Summer 2021 edition of Fineprint, the client newsletter from Simpson Western. The firm is a member of NZ LAW Limited. (C) NZ LAW Limited 2012.

The article is general in nature and provided for information purposes only. It is not intended as legal advice and you should take specific advice from a qualified professional before taking any action based on this information.