No, the bond market is not signalling a recession

In recent months the abrupt signalling from key central banks about the removal of monetary stimulus has both increased volatility and raised questions about the global economy’s ability to withstand higher interest rates. A common question has been whether the US Federal Reserve and others might overreact to surging inflation and trigger a recession in 2023. This market insight is provided by Harbour Asset Management.

So far, the bond market is indicating no. But, both in New Zealand and offshore, there are some interesting messages in yield curves.

Hikes in interest rates and reduction in liquidity may pose challenges for economies and markets until such time as the path of monetary tightening becomes clear and the market believes inflation risks are addressed. With recent policy announcements and market adjustments you could argue that we are already significantly down that road.

However, global GDP consensus forecasts are still strong at 4.3% for 2022 – although this is off the peak of 4.5% recorded through most of 2021. This consensus GDP forecast translates into an expected growth in global profits to $168.16 per share from the peak pre-covid level of $134.60, a 25% rise. There is no sign of a global recession in either GDP forecasts or earnings forecasts.

The bond market is providing the same story. Yield curves around the world get a lot of attention from investors and interpreting them has become more challenging over recent years, due in part to the advent of very large quantitative easing (QE) policies.

But right now, there are some clear signals embedded in yield curves and some interesting interpretations that we can infer. 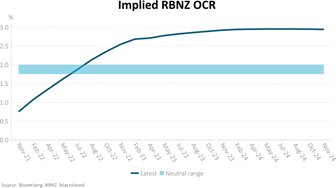 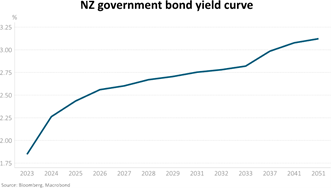 So, what happens next?

Our view is that central banks will likely move fairly quickly away from extremely low (or negative) official interest rates towards something near neutral. This step change is largely already priced into yield curves. Arguably in some jurisdictions, the pace of implied interest rate rises may be stretched.

However, policy makers are expressing concern that inflation expectations are at risk of becoming unanchored with a risk that inflation-expectations move to a sustained higher level. Persistently higher inflation is the greatest threat to markets and asset prices.

And this is the risk. We know that households, firms and governments around the world have much larger debt positions these days. Higher interest rates will impact on spending faster than in prior tightening cycles. It could be that economists are too sanguine on the outlook for economic growth given the potential for interest rate increases. If that is the case, it could also be that corporate profit forecasts are too high.

The most at-risk companies would be those most geared to the cyclical economic cycle, for instance consumer and banking stocks. It could be that the current volatility in growth stocks, those with more secular prospects, are actually more sought after by investors should economic growth prospects cool.

For now, central banks have only signalled a move away from very low rates and the step into actual tight monetary conditions may not be a necessity. Central banks will want some time to see what the first round of rate hikes does to activity and the inflation outlook, with the mantra here all about data dependency. Accordingly, we expect a much slower pace of rate hikes as time progresses.